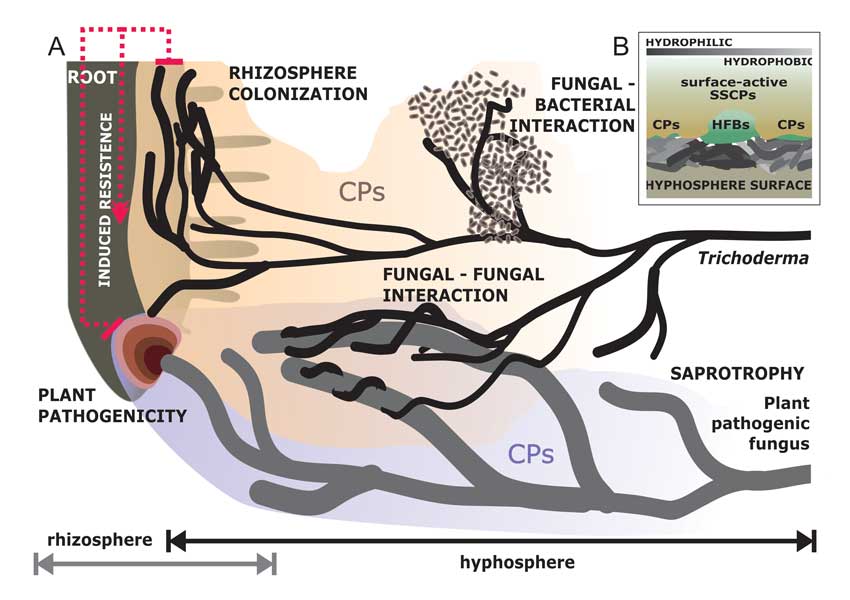 Cerato-platanins (CPs) form a family of fungal small secreted cysteine-rich proteins (SSCPs) and are of particular interest not only because of their surface activity but also their abundant secretion by fungi. We performed an evolutionary analysis of 283 CPs from 157 fungal genomes with the focus on the environmental opportunistic plant-beneficial and mycoparasitic fungus Trichoderma Our results revealed a long evolutionary history of CPs in Dikarya fungi that have undergone several events of lateral gene transfer and gene duplication. Three genes were maintained in the core genome of Trichoderma, while some species have up to four CP-encoding genes. All Trichoderma CPs evolve under stabilizing natural selection pressure. The functional genomic analysis of CPs in Trichoderma guizhouense and Trichoderma harzianum revealed that only epl1 is active at all stages of development but that it plays a minor role in interactions with other fungi and bacteria. The deletion of this gene results in increased colonization of tomato roots by Trichoderma spp. Similarly, biochemical tests of EPL1 heterologously produced by Pichia pastoris support the claims described above. Based on the results obtained, we conclude that the function of CPs is probably linked to their surfactant properties and the ability to modify the hyphosphere of submerged mycelia and, thus, facilitate the nutritional versatility of fungi. The effector-like functions do not sufficiently describe the diversity and evolution of these proteins in fungi, as they are also maintained, duplicated, or laterally transferred in the genomes of nonherbivore fungi.