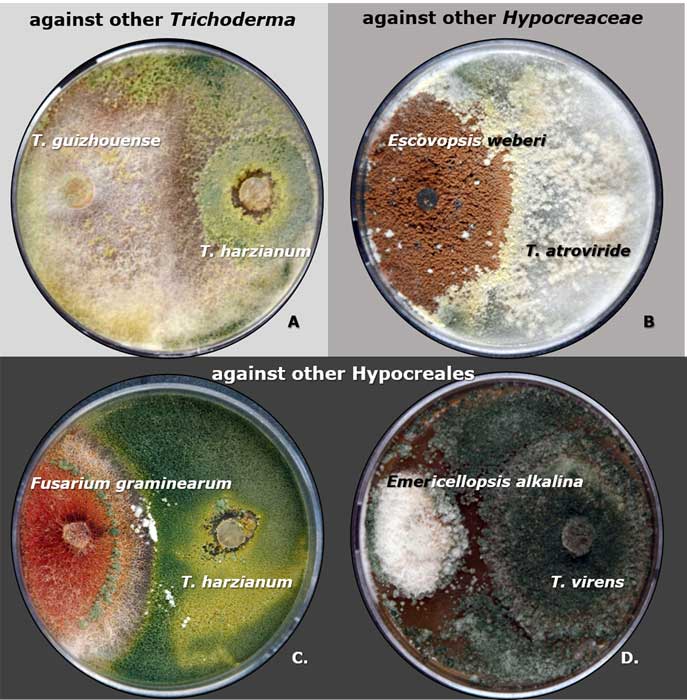 Unlike most other fungi, molds of the genus Trichoderma (Hypocreales, Ascomycota) are aggressive parasites of other fungi and efficient decomposers of plant biomass. Although nutritional shifts are common among hypocrealean fungi, there are no examples of such broad substrate versatility as that observed in Trichoderma. A phylogenomic analysis of 23 hypocrealean fungi (including nine Trichoderma spp. and the related Escovopsis weberi) revealed that the genus Trichoderma has evolved from an ancestor with limited cellulolytic capability that fed on either fungi or arthropods. The evolutionary analysis of Trichoderma genes encoding plant cell wall-degrading carbohydrate-active enzymes and auxiliary proteins (pcwdCAZome, 122 gene families) based on a gene tree / species tree reconciliation demonstrated that the formation of the genus was accompanied by an unprecedented extent of lateral gene transfer (LGT). Nearly one-half of the genes in Trichoderma pcwdCAZome (41%) were obtained via LGT from plant-associated filamentous fungi belonging to different classes of Ascomycota, while no LGT was observed from other potential donors. In addition to the ability to feed on unrelated fungi (such as Basidiomycota), we also showed that Trichoderma is capable of endoparasitism on a broad range of Ascomycota, including extant LGT donors. This phenomenon was not observed in E. weberi and rarely in other mycoparasitic hypocrealean fungi. Thus, our study suggests that LGT is linked to the ability of Trichoderma to parasitize taxonomically related fungi (up to adelphoparasitism in strict sense). This may have allowed primarily mycotrophic Trichoderma fungi to evolve into decomposers of plant biomass.